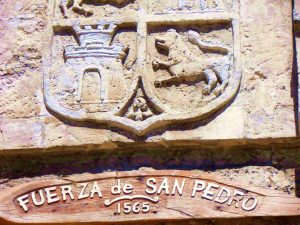 During a recent trip to Cebu I revisited my favorite tourist spot there, the Fuerza de San Pedro (Wikipedia page here).  With a few more photos now in the gallery, I’m ready to do a post on it.  To be honest, Cebu is not chock-a-block with historical sites despite having been squarely in the picture when the Spanish first arrived lo these many years ago.  Ferdinand Magellan met his end in 1521 on Mactan Island, adjacent to Cebu City, after (unwisely) picking a fight with the local inhabitants.  Nothing daunted, the Spanish subsequently sent Miguel López de Legazpi (Wikipedia page here) to carry on the business of taking over the area.  The first approach to Cebu met with hostility from the natives — small wonder, after that spot of bother with Magellan — so Legazpi went on to Samar and Bohol and returned to Cebu a few months later after having consolidated his position a bit.  He overcame the resistance offered by Rajah Tupas and established a colony there in May, 1565.  Four years later he transferred the settlement to Panay Island because it was too hard to obtain provisions on Cebu.  One wonders if native resistance to Spanish presence on the island had some part to play in that circumstance …

Well, we all know the routine with colonization, don’t we.  You barge in, throw your weight around, get a toehold, then the first thing you do is build a fortress of some sort.  Nothing Legazpi did diverged from that pattern and the original Fuerza de San Pedro was the defensive fortress constructed to serve the purposes of the first colonists.  The original structure was not stone, of course, but something cobbled together from locally available wood.  The current stone building dates from 1738 (despite the date in the photo above) and that’s the object of our consideration here.

Let’s have a look at the portal: 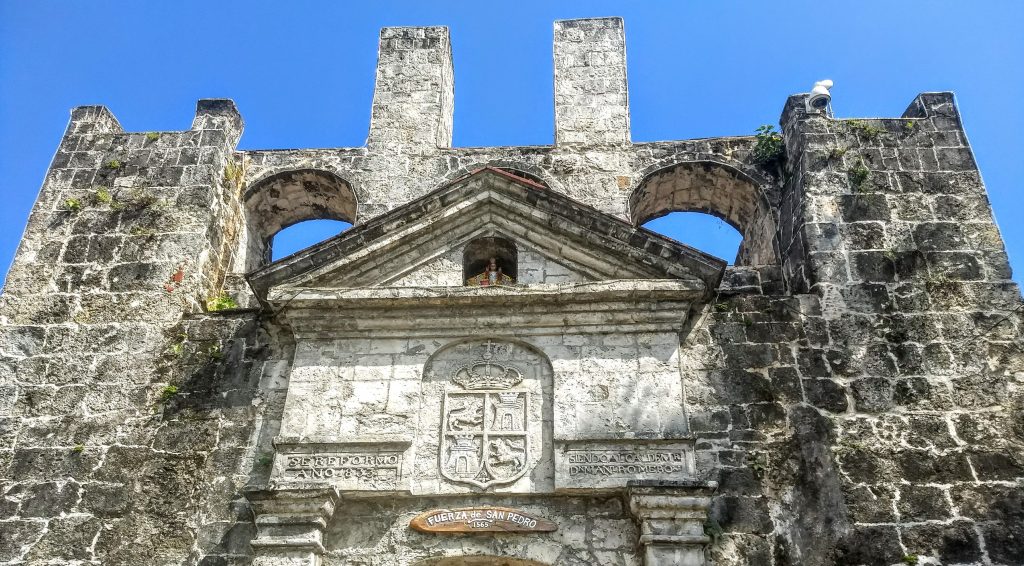 Let’s deconstruct a colonial facade of 1738.  We’ve got the European bit in the center, obviously, with the arms of Castile and Leon (carved quite prettily, it must be said) as the largest element.  Work in stone during the colonial period was usually done by Chinese craftsmen, since they had some background in masonry and stone carving which the Filipino natives lacked.  The stone used in most colonial buildings in the Visayas region is coral stone, which is the case with the Fuerza, as well.  Here’s a close-up of it: 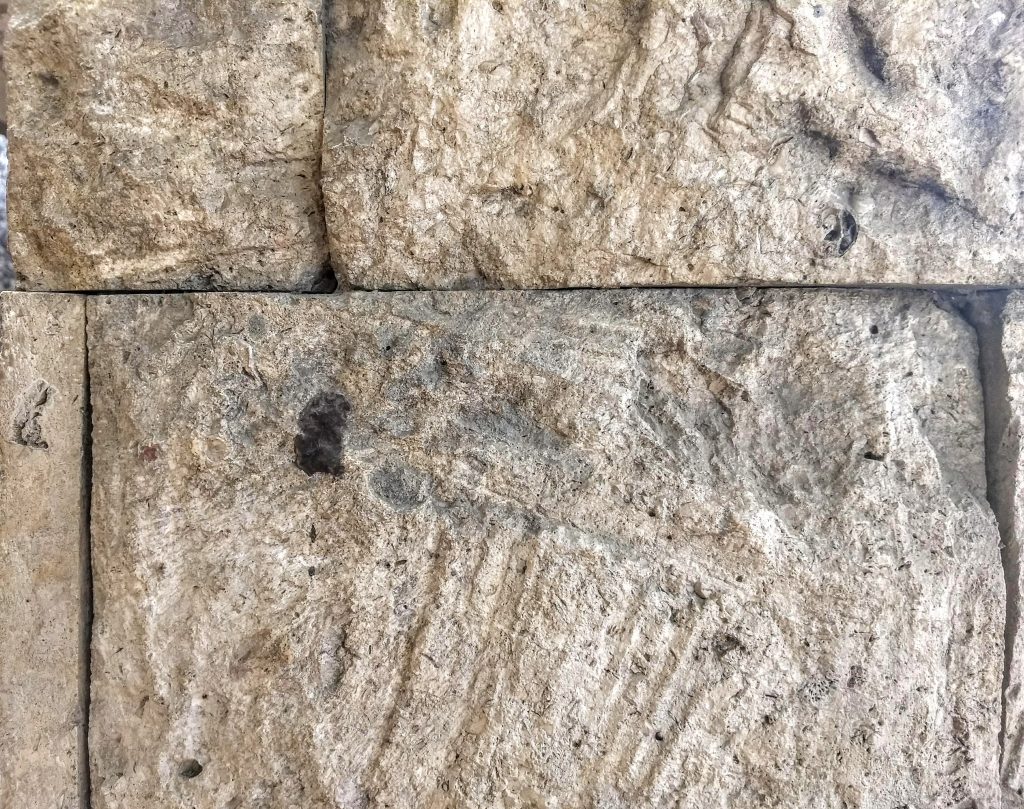 As you see, it’s like looking at the sea in solid form.  It’s quite durable stuff, but it doesn’t render fine detail particularly well because it’s too coarse-grained.  The geology of the islands in Visayas is almost exclusively sedimentary and of recent origin, so there are no fine limestones or sandstones available.  Our colonial facade, then, uses simple architectural elements for the capitals and the pediment — straight lines, nothing fancy, despite the year being 1738 when the Baroque was at its height and architectural ornament in New Spain and Spain itself involved almost everything except straight lines.

The European elements have been taken from some standard plan — attached columns with capitals, a standard triangular pediment at the top, all quite according to Hoyle.  The colonial elements show above the pediment.  We have semi-circular openings and little towers and who knows how it all relates to the European elements at the center.  Why do the two tallest towers jut up above the pediment?  What is the point of the semi-circular openings with their round arches in a facade that has nothing else round in it?  Well, we needn’t wrack our brains too hard looking for answers because in all likelihood a simple answer will do: they’re the product of the fancy of Chinese craftsmen building something they’ve never seen before.  A European of classical persuasion would probably have put nothing above the pediment, which would be placed higher to form the final element in the facade.  But it’s Cebu in 1738 and our Chinese workmen are doing their best, so let’s not get too fussy.

The inside of the Fuerza is a pleasant space, looking very touristy these days without any military sense about it any longer.  Here are some views: 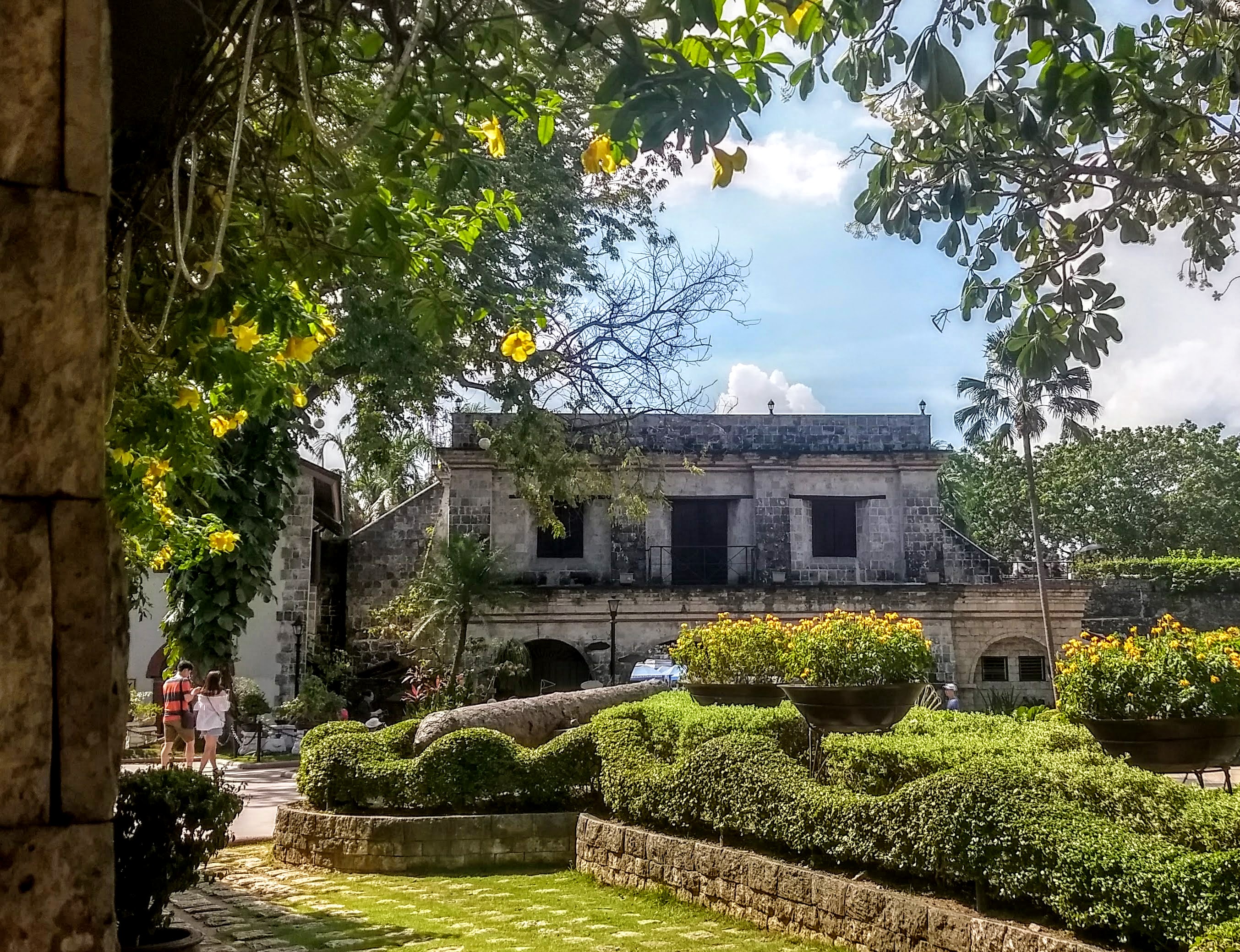 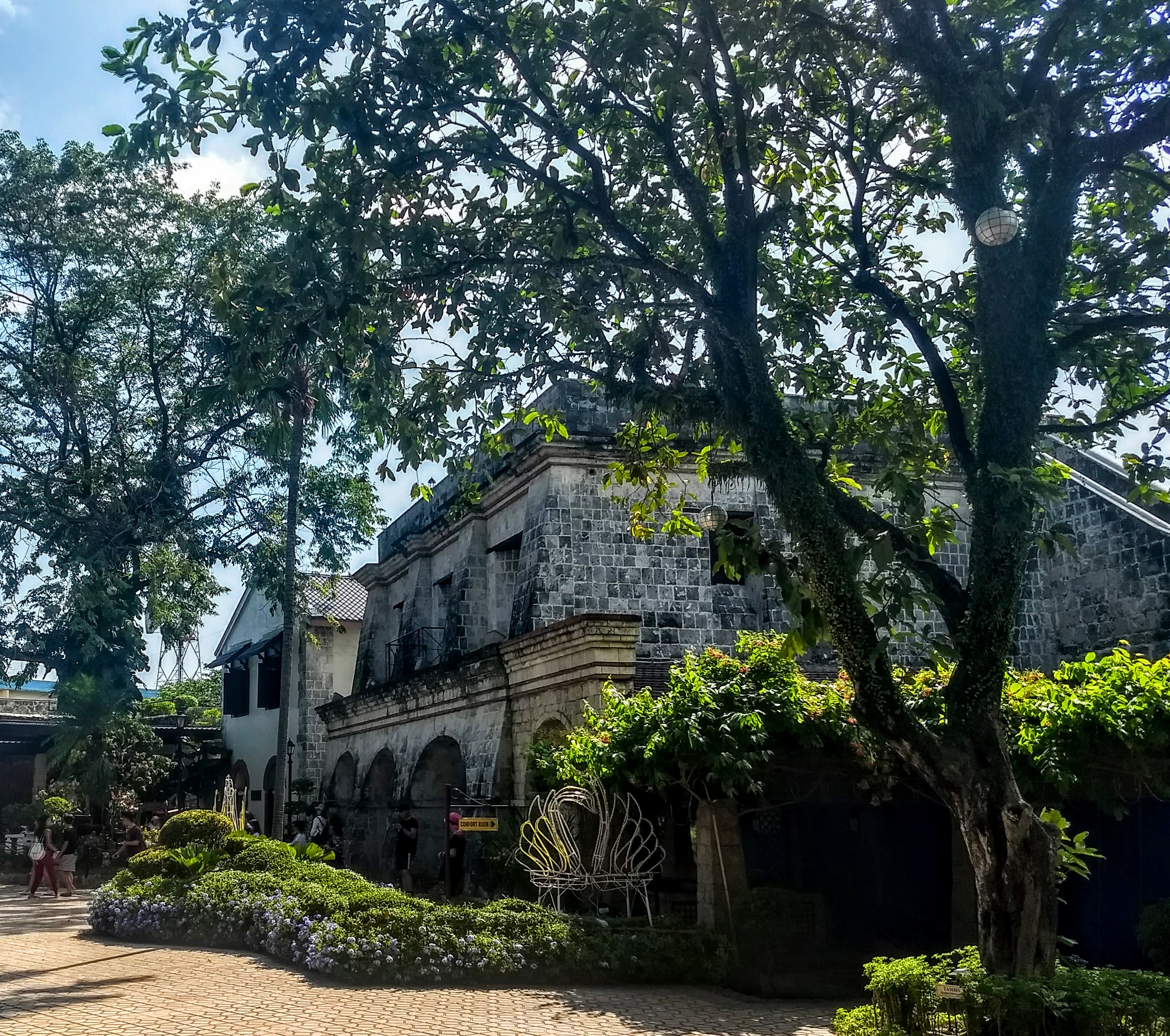 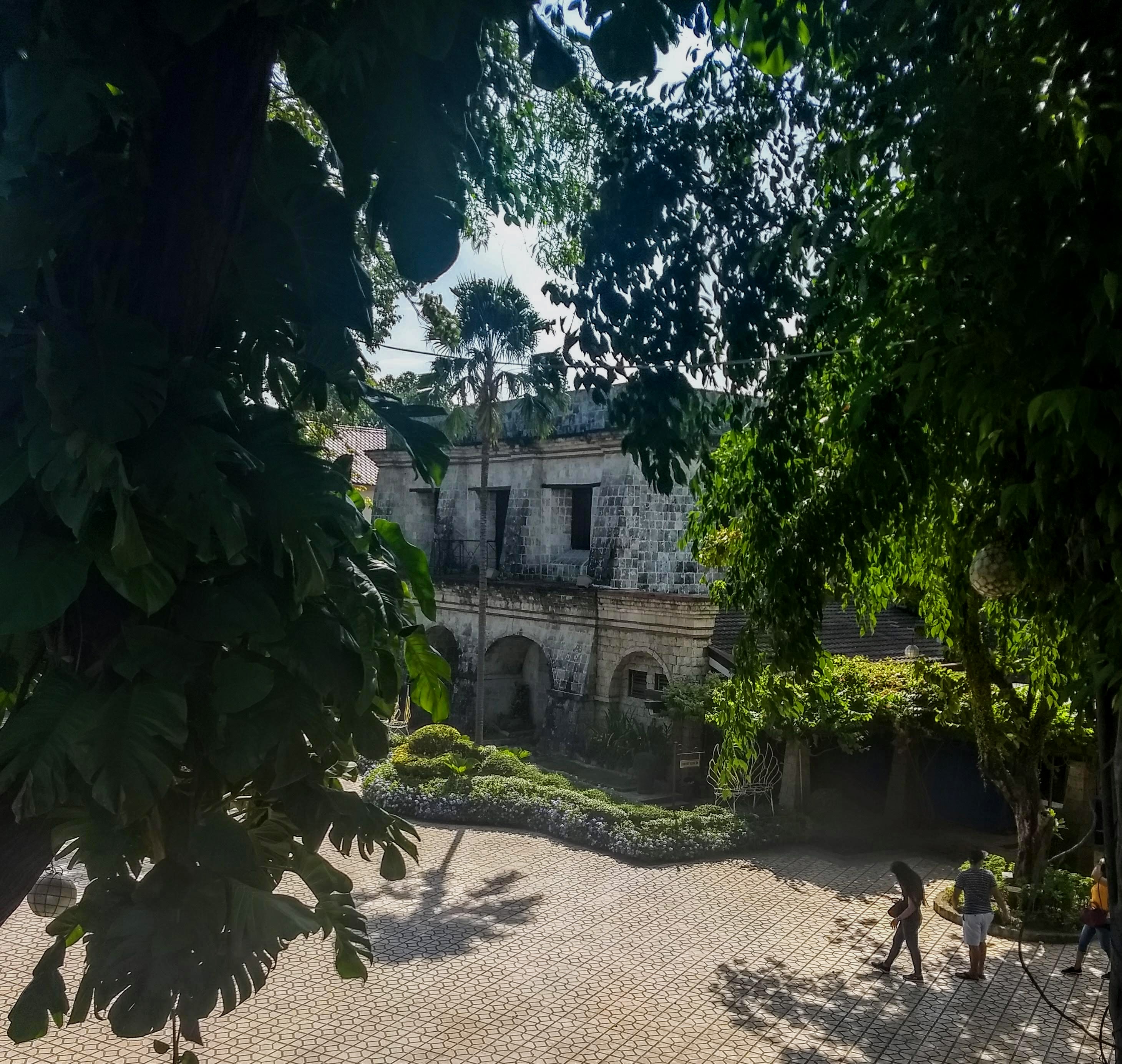 The design of the Fuerza is triangular.  At each point of the triangle there is a bastion, named for the Immaculate Conception and two saints, St. Ignatius of Loyola and St. Michael.  Having St. Ignatius involved is a dead giveaway that Jesuits were in the picture, of course.  They arrived in the Philippines in 1581 but didn’t establish themselves in Cebu until 1595 (info here).  They remained in the country until 1768, the year in which King Charles III banished the order from Spain and its dominions, including the Philippines. 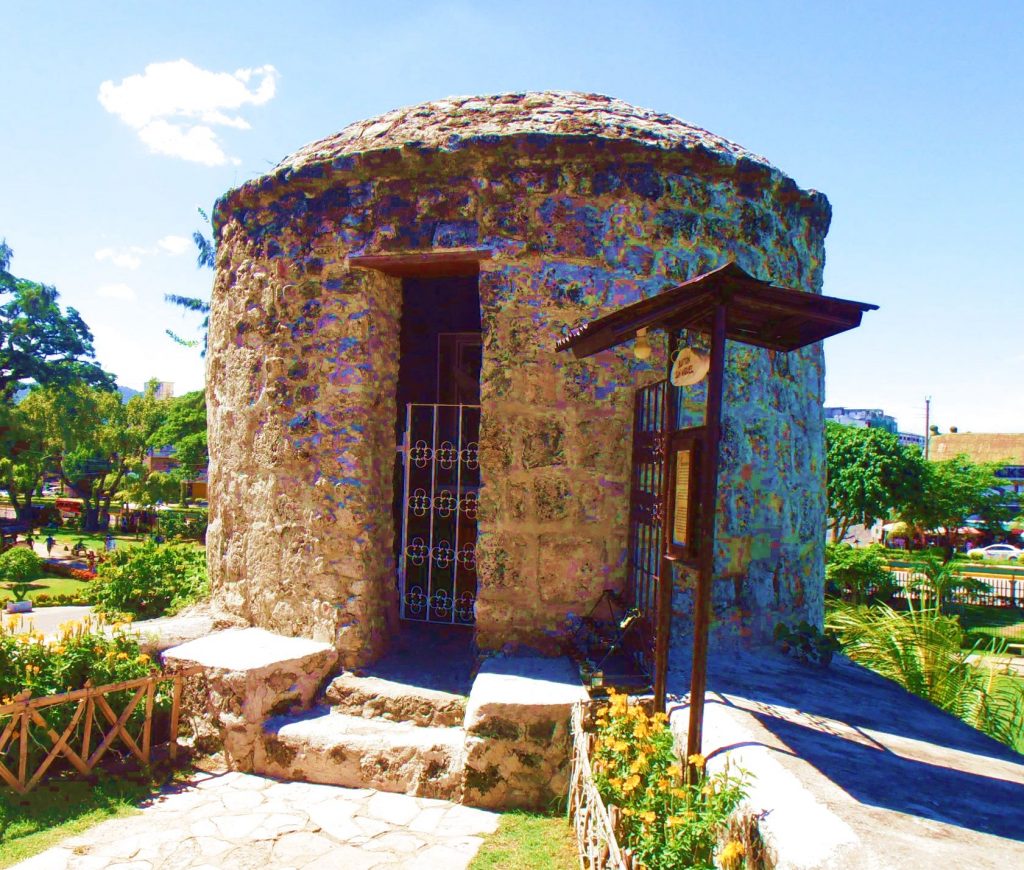 Today there are shrines in the bastions, not guns, so the feeling of the Fuerza is really much more like a monastery than a military installation.  Arcades line the walls of the Fuerza, as well, looking rather more like cloisters than like passages for soldiers on the run to their battle stations. 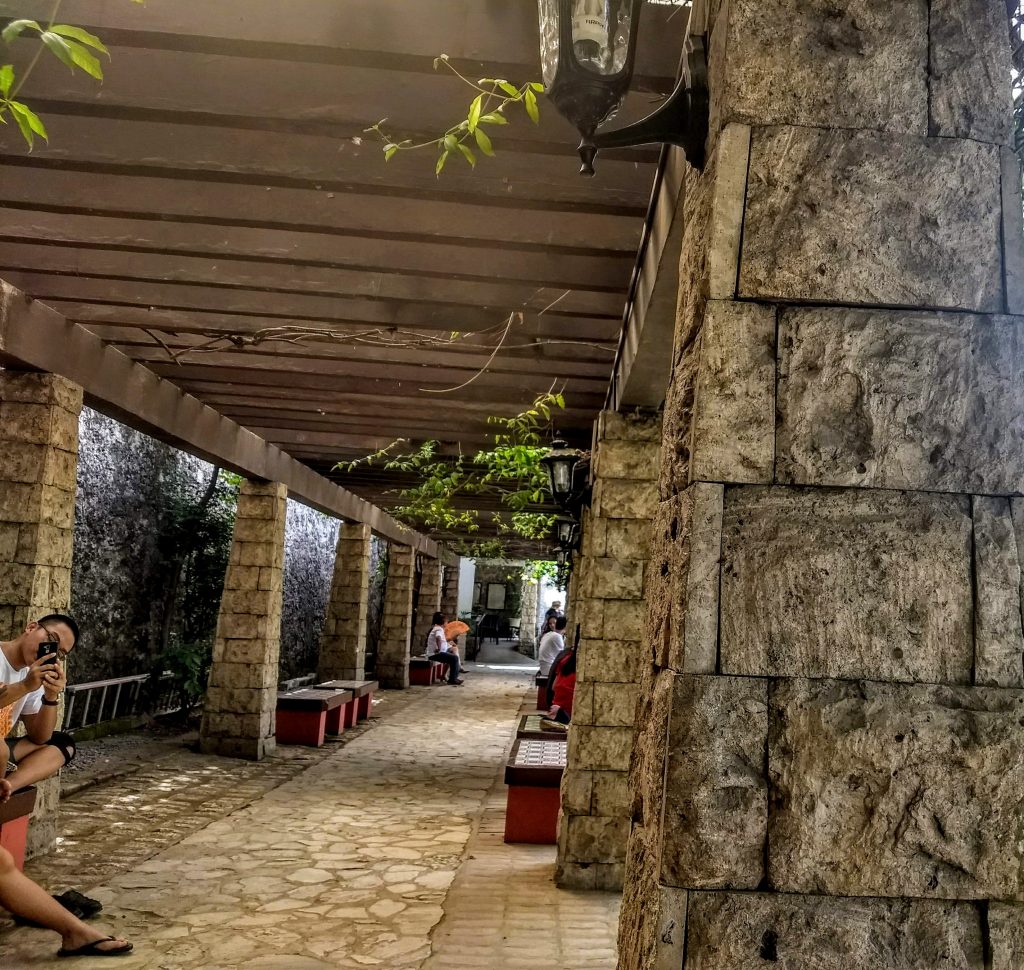 I should mention that the photos make the Fuerza seem a bit grander than it is in fact.  It’s a small place, really, you can see the whole building from any vantage point you gain while making the tour.  Since the scale can’t do much to impress, it’s a good idea to pay close attention to the details.  The plantings are lovely, and as you move about the Fuerza you have some lovely views of the inner courtyard and the Plaza Independencia park in which the Fuerza is located.  Here are some pics: 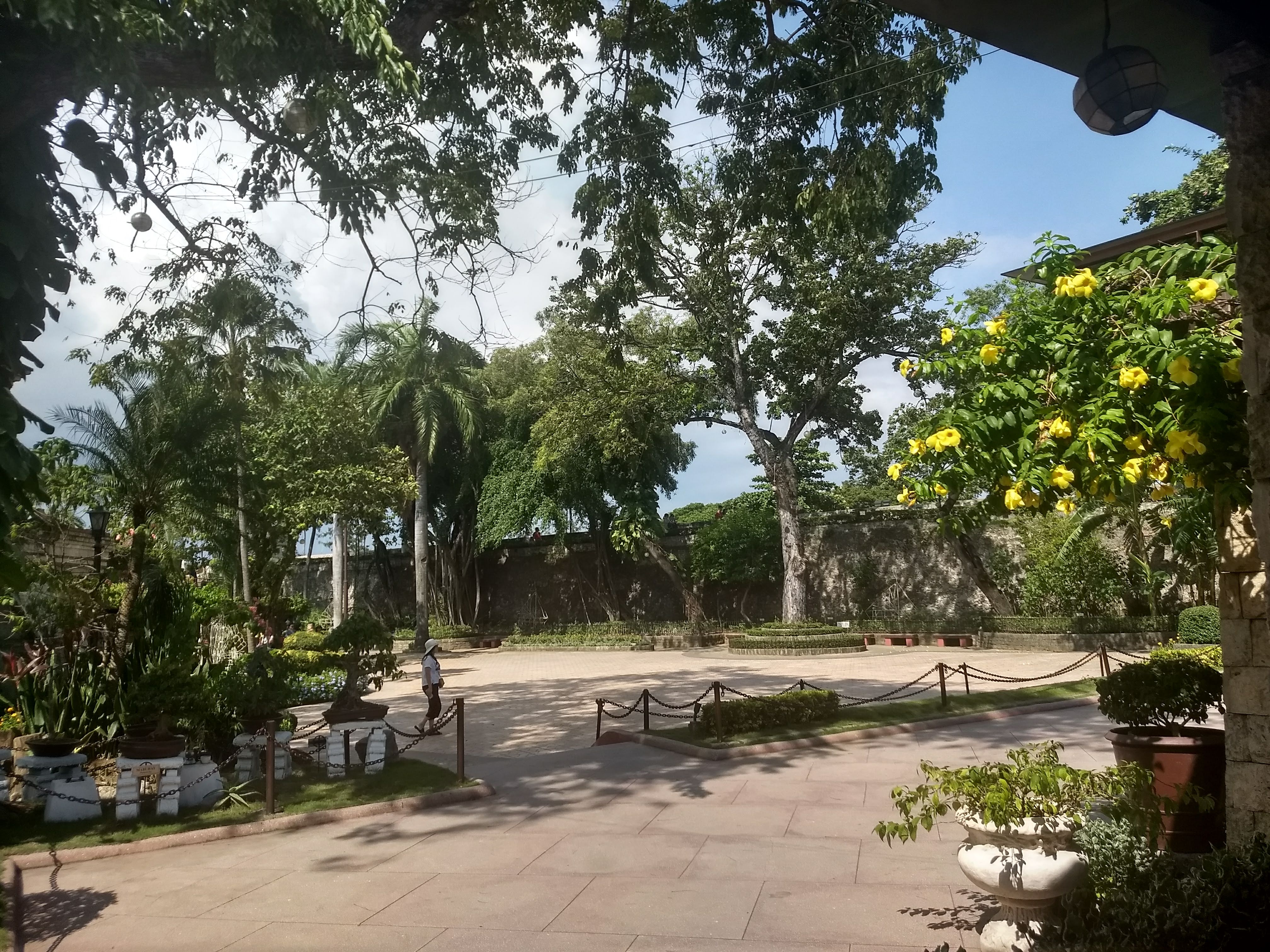 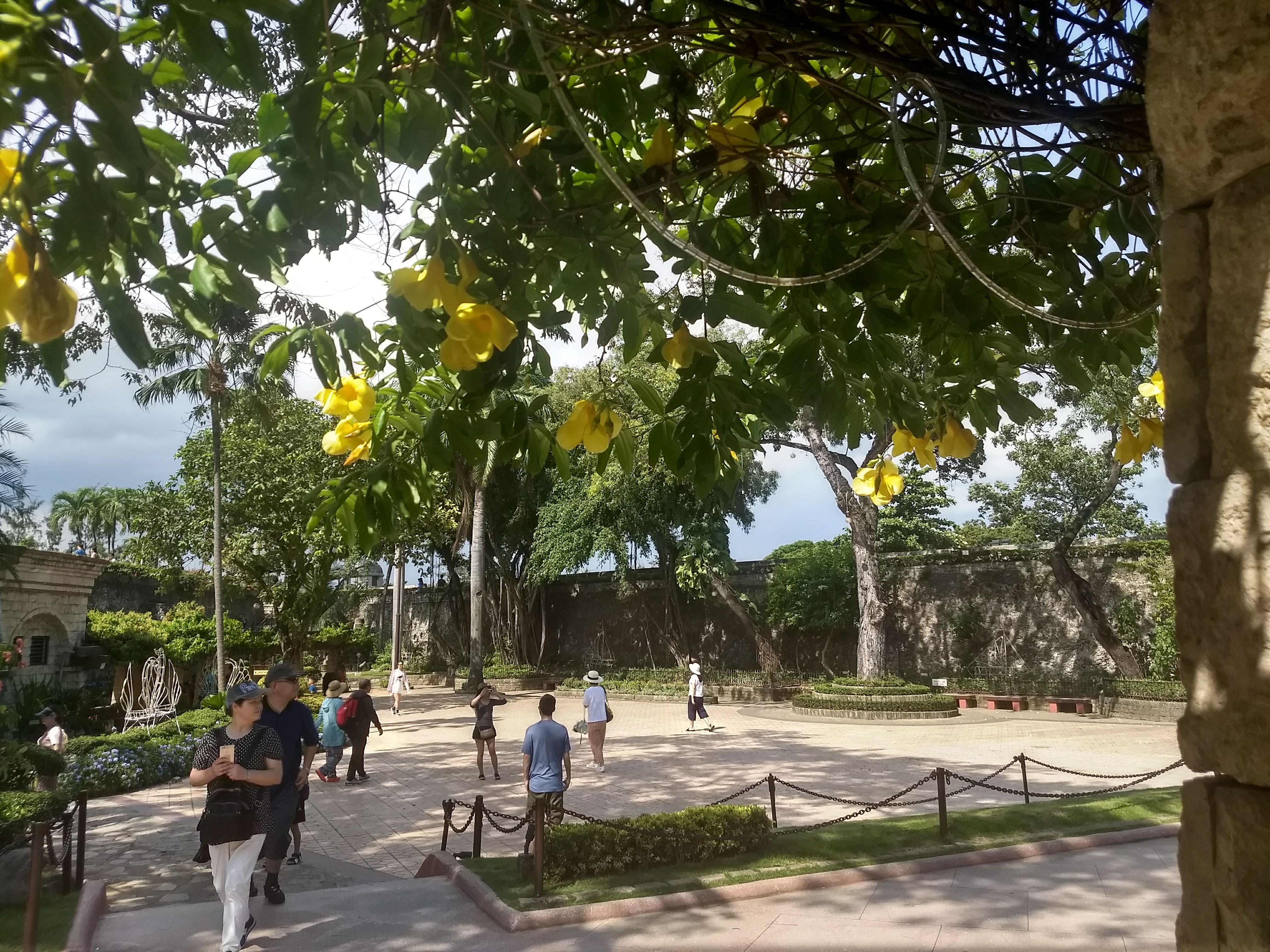 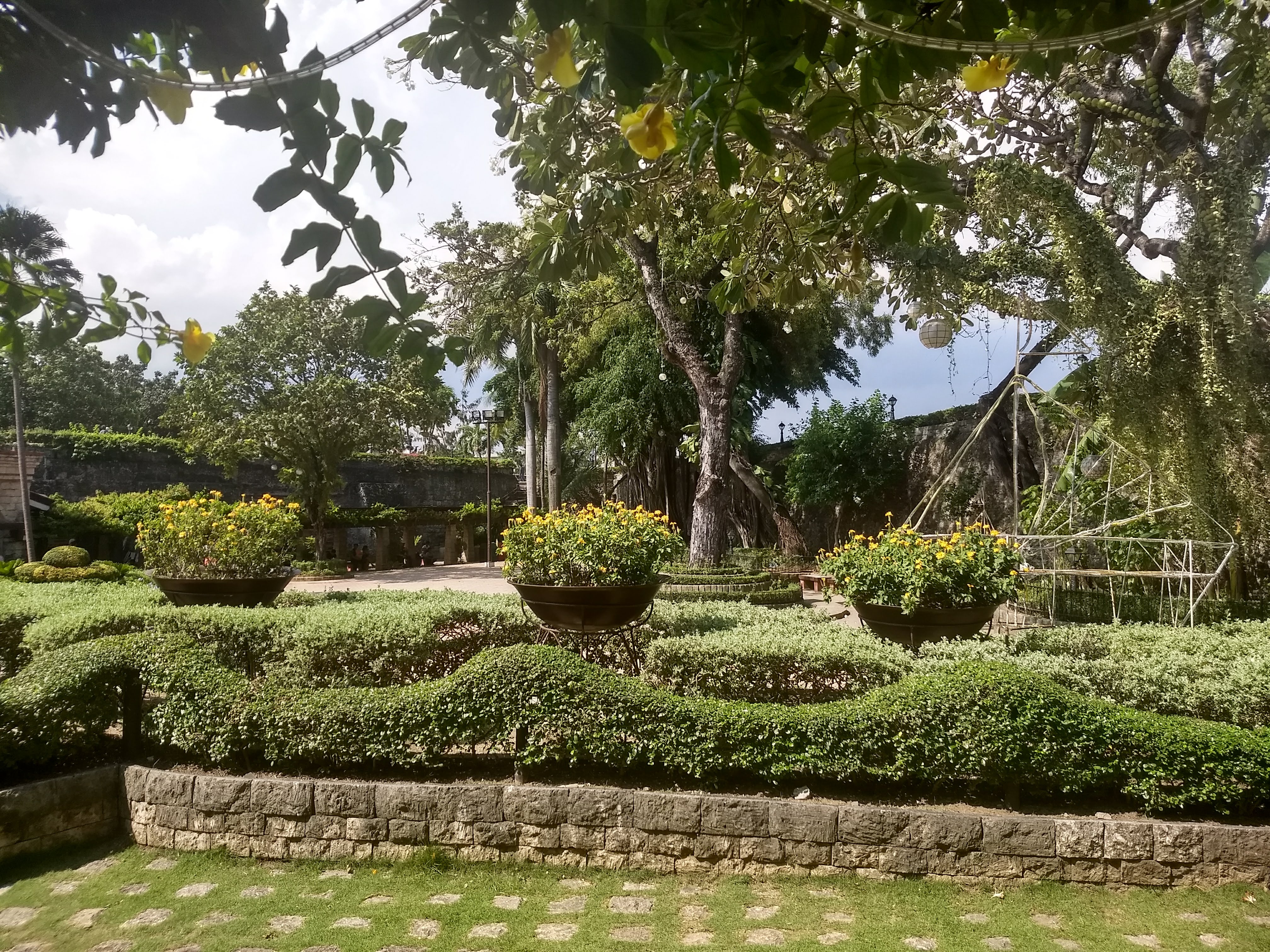 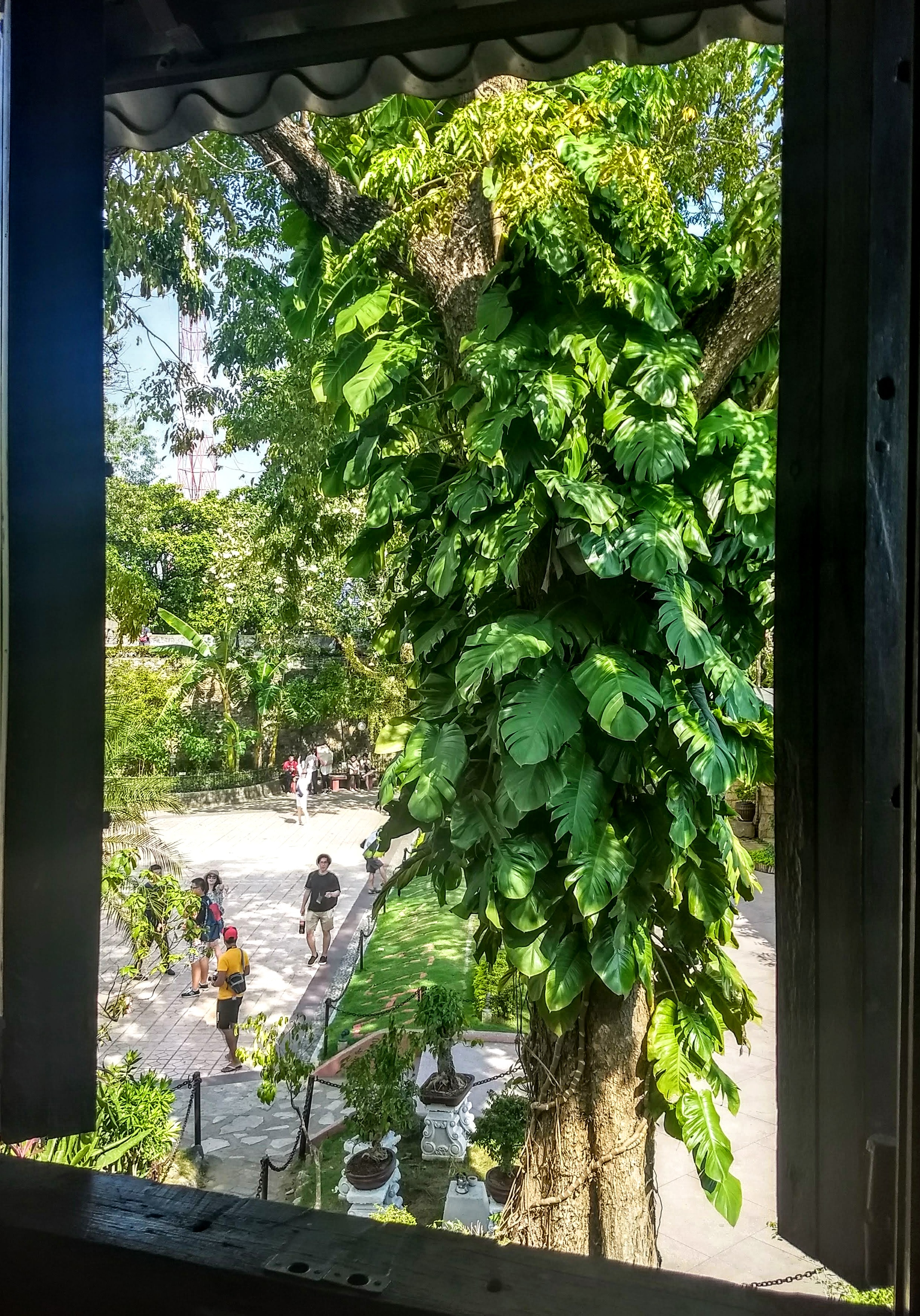 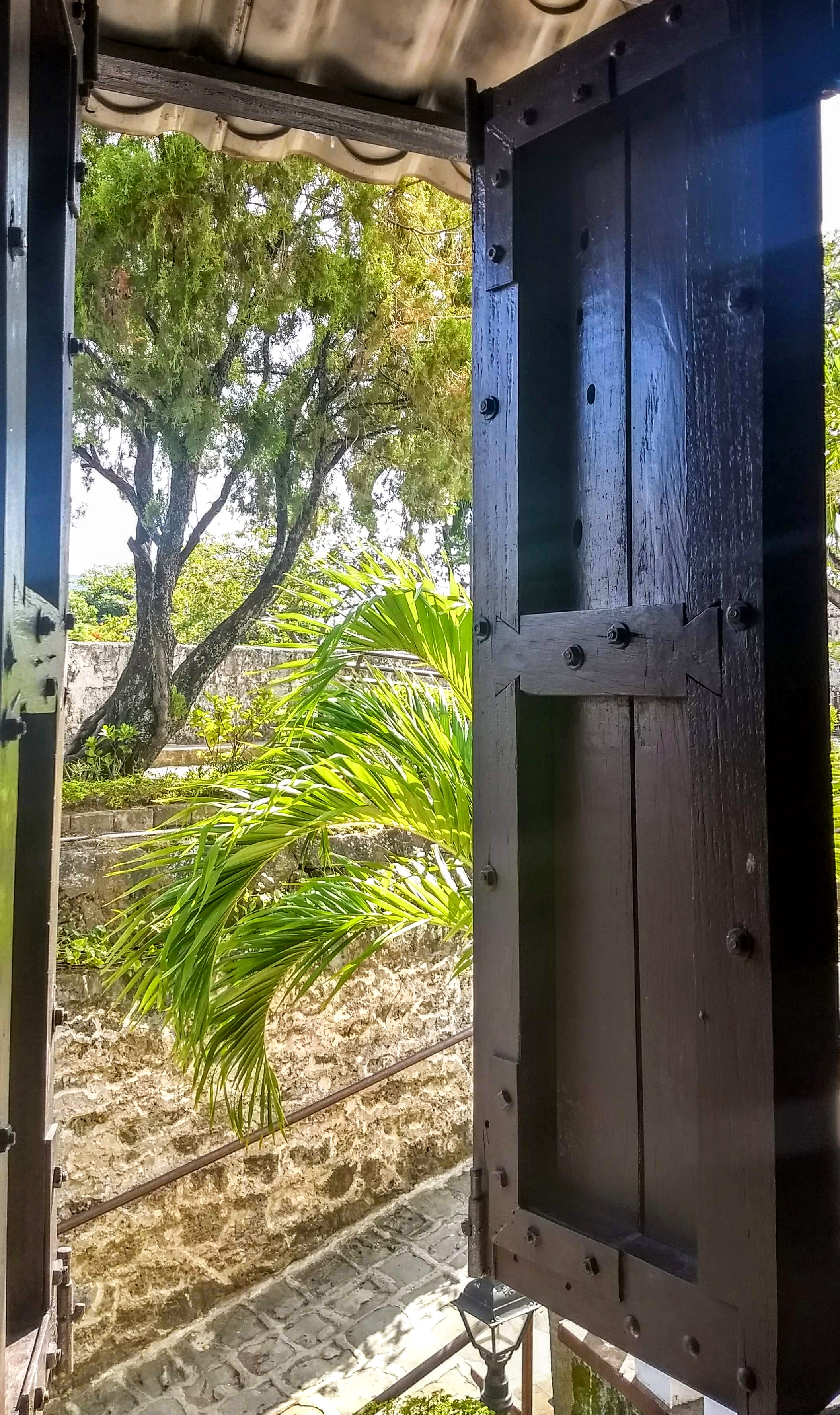 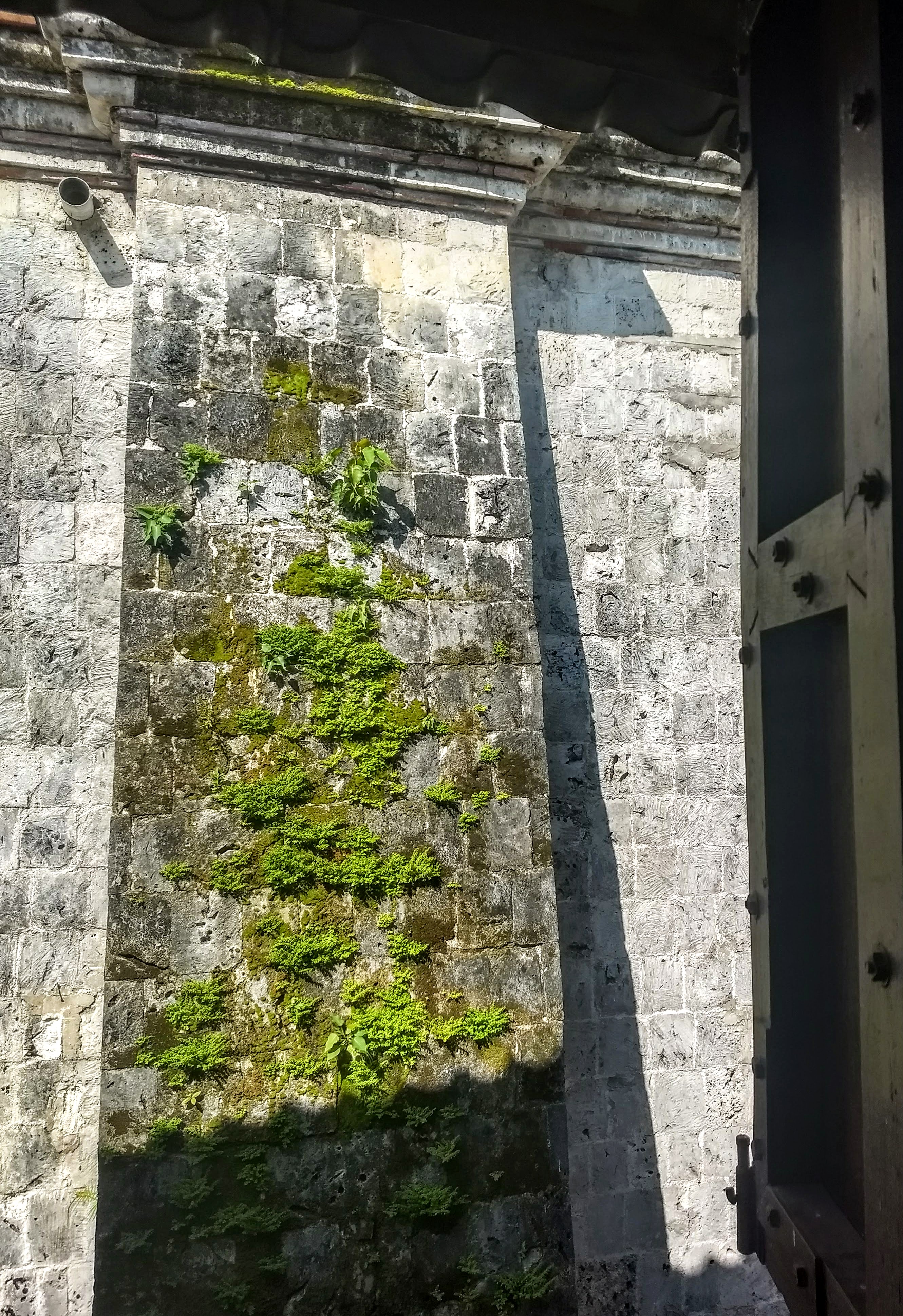 There are some remarkable trees and flowers at the Fuerza and given my propensity for the botanical I can’t not show a few plant pics.  The arcades along the interior sides of the building are arbors, in point of fact, planted with Allamanda cathartica, known as “Yellow Bell” in the Philippines.  Those of us familiar with wisteria arbors from the States are used to having things be a bit on the droopy side, so an arbor has to be fairly high to allow easy passage.  With Allamanda cathartica, however, there’s no need for that.  The plant doesn’t droop through the arbor slats, it stays up above looking quite jaunty and remaining in continuous bloom throughout the year.  The foliage is a lovely, shiny green and the flowers have what could well be the color of happiness.  It’s always a delight to see and makes the perfect arbor plant.

Some of the frangipani (Plumeria ) trees are quite large, which means they’ve been there a long time.  There’s one near one of the bastions that has a trunk as thick as my leg, so that deserves its own pic. 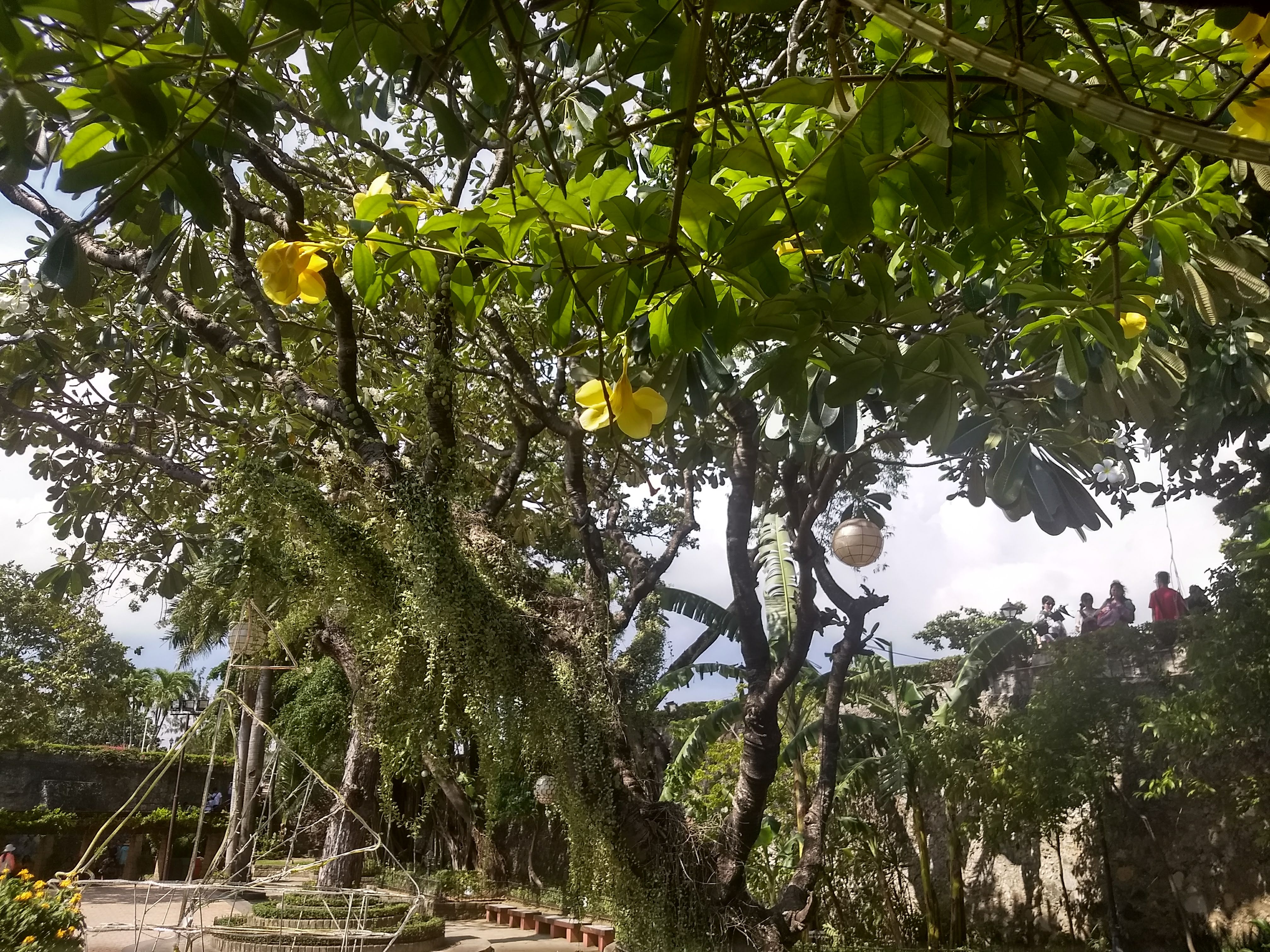 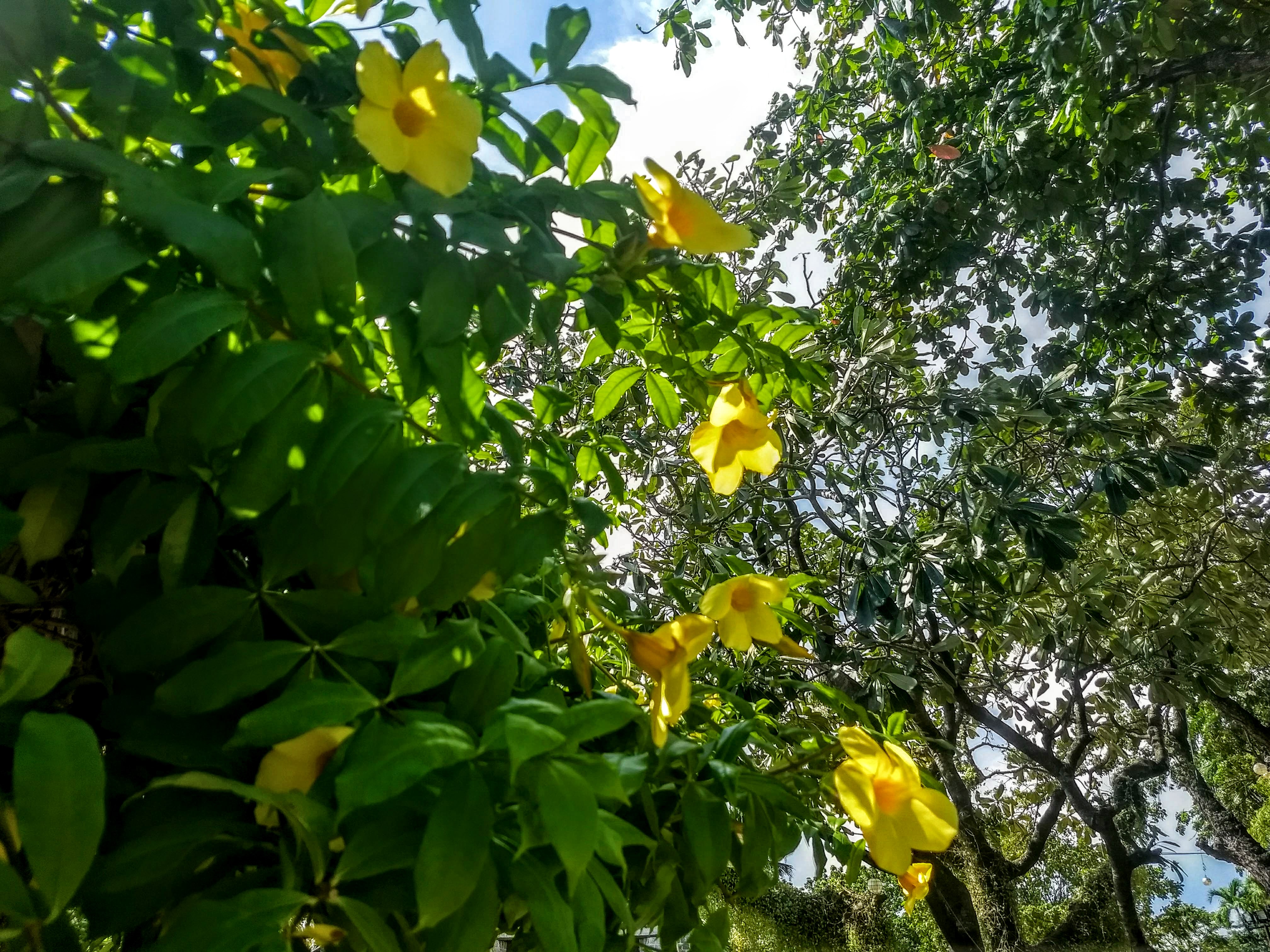 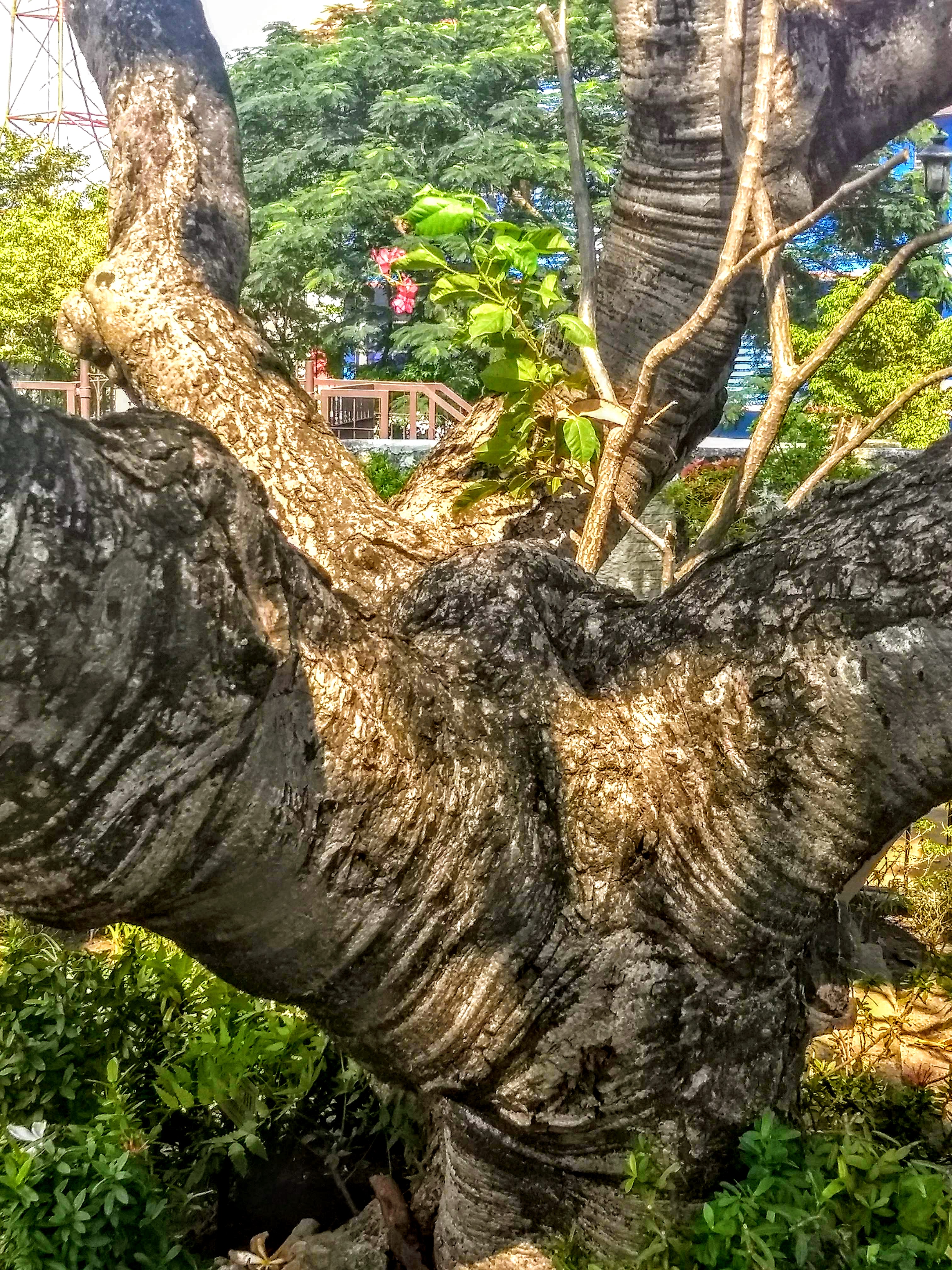 The logistics of visiting the Fuerza are the work of a moment.   It’s part of Plaza Independencia, near the port area of Cebu, easy to get to by taxi from anywhere in the city.  The entrance fee is very low (P30 I believe) and there are restrooms inside so you can stay a long while if you like without having your biology force you out by dint of necessity.  If I were you, I’d go in the morning or the later afternoon. In the heat of midday shade can be at a premium in the Fuerza and there’s no air-conditioned space to slip into if you find yourself streaming with perspiration.

In the room where I took the pics above with views from the windows you’ll find a display of historic photos of Cebu.  Not many of them are germane to the Fuerza itself, but they’re worth a look.